Moselle Abdul Aziz Al Ghurair was born in Ancient Egypt around the year 2035 BC. She lived in Thebes during the reign of Pharaoh Mentuhotep II; her father, Anmet, was one of the Pharaoh’s trusted advisors. At the age of 25, she was being saved for marriage to one of the Pharaoh’s sons, but the Pharaoh was suddenly assassinated.

She and her family were forced to flee Thebes because of her father’s political rival Vizier Amenemhet I. They were hunted through the desert until they found a small village. It was at this small village, that news the Vizier was nearby reached them. Anmet was afraid for his family and made a rash decision. He decided it was best that he took his families’ lives and not the Vizier, so he poisoned Moselle, his wife and himself.

When the Vizier arrived, he cursed Moselle and her family to live forever as the undead. He then took her body, mummified it (her heart, lungs, brain and liver were removed and placed in canopic jars), and hid it in a crypt along with his treasures.

In 1935, Moselle’s father finally discovered and unearthed the crypt in Kufra, Libya. He had been resurrected and was now something called Cursed Undead or in common terms: a mummy. He studied the resurrection process and used what he learned to raise his wife and later Moselle.

Once again, Moselle was “alive”, ageless, and appearing to still be in her early to mid 20s. The world was a very scary and vastly different place. It took time for her to adjust. Her father taught her to keep journals, because the Cursed Undead have poor memories. So Moselle has a huge collection of diaries and journals in her home.

But an ailing memory was not her only challenge. As a Cursed Undead, she must drink lots of water to keep her body hydrated and at night she is required to perform a ritual. The ritual consists of wrapping her body in lotion-soaked linen strips. Sleep is important for the Cursed Undead. While the water and wrappings do keep her skin and body looking fresh they do not halt the rate of decomposition. In order to maintain herself, and stay “alive”, she must drain the life-force from other living beings. This not only feeds her, but heals her too.

Being ageless comes with additional disadvantages, one of which Moselle has embraced and learned to live with: her mummy’s curse. One part of the curse creates a clumsiness in people in her proximity, while the other part is much more sinister. Above all else, her curse attracts snakes(mostly venomous). They come from miles and miles away and are attracted to her scent. They do not attack her, but they can overwhelm and overtake her living spaces. In some occasions, they actually are a help and considered by her to be a blessing. It’s a love hate relationship.

Moselle and her family have had to move a lot and take turns going into hiding so people don’t realize they are ageless beings. She has lived in Morocco, Spain, England, Argentina, and several spots in America. She currently lives outside of Los Angeles in her family home; with her multitude of cats, and a force of guards that are actually golems, created by her father.

Her father runs a successful nightclub business of which she has worked as a spokes model and hostess at for events. This is how she met her friend, Sabrina London. Moselle has often found herself infatuated with human men. She’s currently dating Jackson Abernathy, a graphic designer under her father’s employ. She has worked closely with Jackson for several months creating advertisements.

The owner of a power sense of smell, Moselle thinks Jackson smells yummy and is very much sexually attracted to him. She does not realize it, but at times she can be very sexually aggressive.

Moselle not only stockpiles her journals, and has a small army of cats, but she also collects and stores—in a climate controlled environment—all her favorite clothing through the years.  She has dresses dating from WWII to now. She is very proud of this.

Although having lived longer in modern time than ancient times, Moselle relates more to the ancient Egyptian Gods. She often prays to them and asks them for their blessings. She has even sworn she’s seen one or two of them in person.

If asked what her least favorite things to do were, she might listing driving. Although the caretaker of her father’s large collection of vintage sports cars and other automobiles, Moselle does not care to drive. She never truly took to it after her rebirth.

Lastly, never refer to her or her kind as zombies. She hates that. 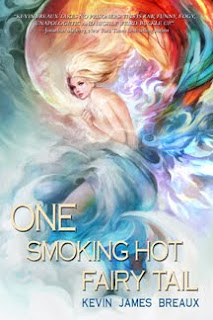 You can read her story here. One Smoking Hot Fairy Tail (The Water Kingdom) by Kevin James Breaux Link: http://a.co/dGRmElt

Posted by kevinjamesbreaux at 1:20 PM No comments:

I am happy to announce that ONE SMOKING HOT FAIRY TAIL won the Gold for best reviewed novel. Here is the award link: https://hungrymonsterreview.com/2017/04/05/monster-literary-book-awards-april-2017/

And here is the review:  https://hungrymonsterreview.com/2017/03/21/one-smoking-hot-fairy-tail/

This is the second Gold I have won there. So I am very happy.

TWO POLLUTED BLACK-HEART ROMANCES is done and at the publishers. It ended up just over 109,000 words. That's over 26,000 words more than OSHFT. I wanted to give the fans that extra content. :)

I have cover art done and more cover art being worked on. I will pick from the two which works best. The book is on track for a JUNE release.

Posted by kevinjamesbreaux at 3:06 PM No comments: